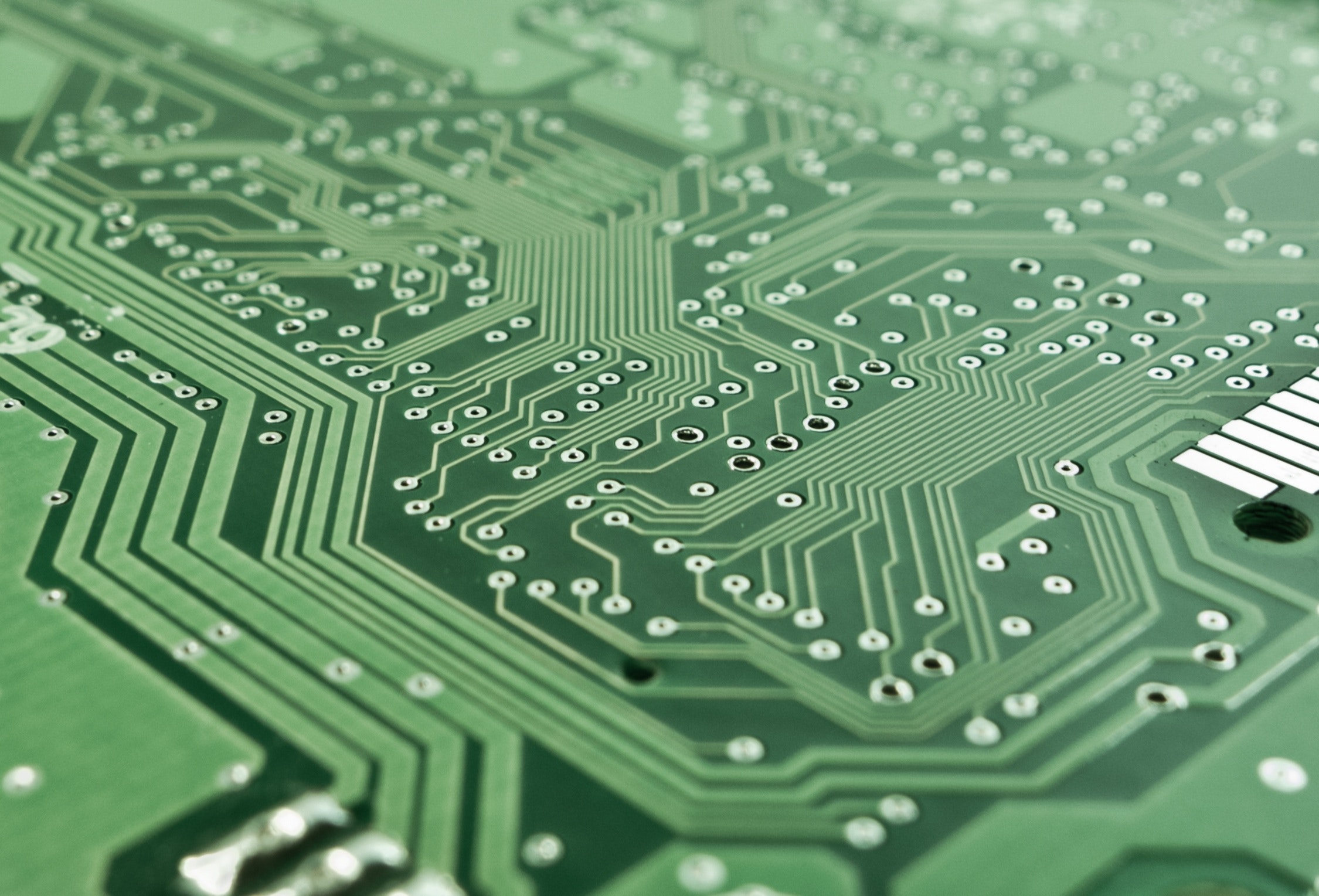 While in Windows Server 2019 you already have the ability to use stretched clustering, it was not yet possible with S2D enabled hosts. With the arrival of Azure Stack HCI OS, there is no holding back and we can now benefit from stretched clustering for hyper-converged systems!

As you might have heard or read about here, Azure Stack HCI will move forward as a new operating system with integration to Azure. In the new Azure Stack HCI OS there are lots of new features that we tried before and during public preview. It is important to understand that we did the testing with a preview version that is released as Azure Stack HCI 20H1. Performance on the GA version can be different.

Stretched clustering for HCI, is a very welcome feature and requested by a lot of customers for a long time. But are there differences in performance in compare to single site clusters? We too were curious about the performance differences and did some testing.

Before we start testing, first a little bit of background info. When hyper converged nodes are stretched across 2 sites, you have the ability to stretch the volumes across the sites. While it seems like there is only one volume, if you dive below the surface you will see multiple volumes. Only one volume, the primary volume, is accessible from both sites at the same time. The secondary volume in the other site is standby for access and only receiving changes from the primary volume. This is just like in any other stretched or metro cluster solution. When disaster strikes the primary volume goes offline and the replica is brought online in the other site. The VMs fail over and start so the applications are accessible again.

When you create a stretched cluster and are ready to deploy volumes, you have 2 options: you can either create an asynchronous or synchronous volume. More info on which option to choose is described in the next chapters. 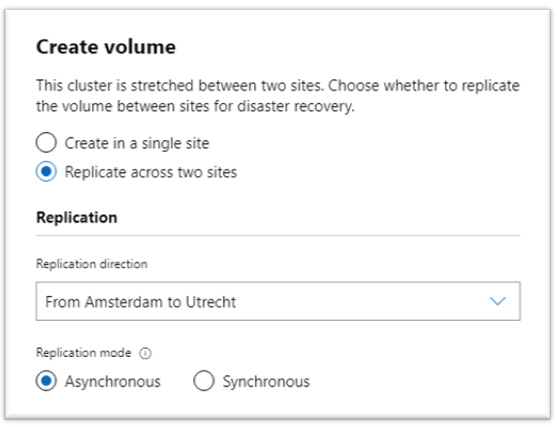 With an “Asynchronous” volume the system accepts a write on the primary volume and responses back with an acknowledgement to the application after it is written. The system then tries to synchronize the change to the replica volume as fast as possible. It could be milliseconds or seconds later that the replication is finished. Depending on the amount of changes and intervals of the system, we could lose x amount of changes that already have been written to the primary volume but not yet to the replica volume, in case of a failure of the primary site.

A volume that is setup as “Synchronous Volume” will respond to the application with an acknowledgement after it has been written in both sites. The write is accepted by a node and copied to the other site. When both blocks have been written, the application will receive an acknowledgement from the storage. When the primary site fails there is no data loss since it’s in sync with the secondary site.

To give a better understanding of what our test setup looks like we provide some extra information.

In this case we have 4 servers that only contain flash drives. The servers are physically in the same rack but we simulated 2 sites based on 2 subnets. The primary site is called Amsterdam, the secondary site is called Utrecht.

In this setup the servers from both sites are in the same rack and cable distance is only meters instead of several kilometers or miles. So there is no additional latency because of the distance between the sites. That is important to keep in mind.

Both sites contain 2 servers and each server has:

– One volume that is not replicated to the other site but only between the nodes in the same site.

Per server we have a total of 3 volumes and on each volume we deployed 10 VMs for testing. 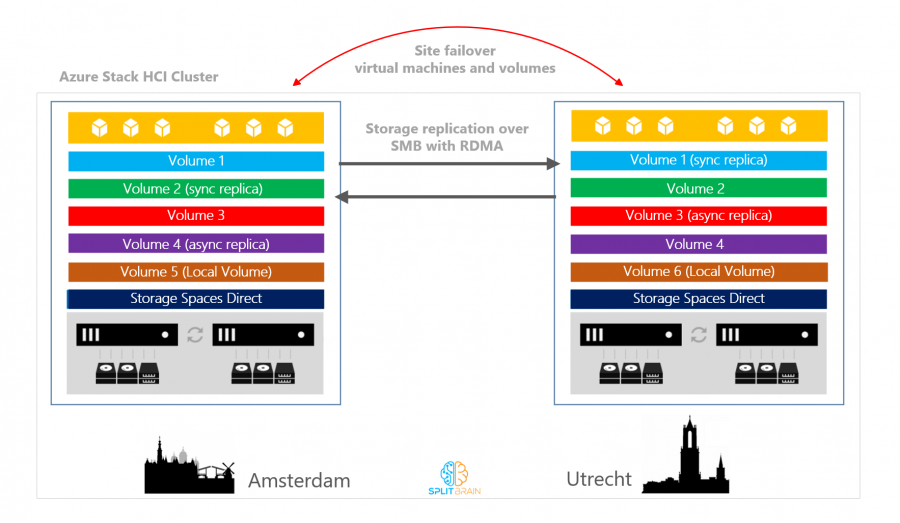 We use VMFleet and DiskSPD to test the performance of the volumes. With these tools we can quickly create a large amount of VMs and disks that we use for testing. When the VMs are deployed you can start the load tests on all the VMs simultaneous with a single command. During our tests we used the following test parameters:

First we start testing with the local volumes and boot the 40 VMs (10 VMs per volume) on the local volumes. Then we conduct the three tests based on zero writes, 30% writes and 100% writes. The results can be seen below.

For our last test we also use an stretched volume, but this time we used an Asynchronous volume. Again we only use the 40 VMs that are located on this volume and run the same tests.

The difference is starting to show when we start writing data. The synchronous and asynchronous volumes differences are huge compared to the local volumes. Considering these systems are next to each other, it will be worse when there is, for example, 50 km of fiber connection between the sites.

Stretched clustering is a great way to improve availability for hyper-converged clusters. Although the preview build performance results are not satisfying enough. It’s good we test this in early preview stages of the Azure Stack HCI OS, so the product gets the improvements it needs before Azure Stack HCI OS gets to GA.

If you have any questions or want more information about Azure Stack HCI OS, or stretched clustering let us know! We are happy to assist!